Here are a couple of bookish books I’ve read recently! Emily Henry’s new romance novel Beach Read was my BOTM pick for April- it’s been a popular release this spring that helped pull me out of a reading slump! Also meant to help with the slump, I’ve been saving Robert Macfarlane’s charming little personal essay, The Gifts of Reading, for a moment I needed a pick-me-up; it’s a tiny little booklet of just 34 pages, but heartwarming and inspiring in spite of its size. 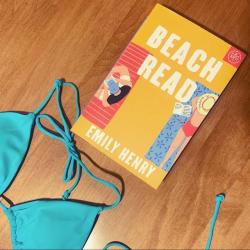 Emily Henry’s Beach Read is a romance novel in which a romance novelist (January) and a literary fiction writer (Gus) meet again a few years after their college writing class days. Suddenly the two are neighbors, and after being thrown together by the town’s bookshop owner they strike up a competitive friendship and challenge each other to swap genres for the summer. Meanwhile, both are dealing with trauma from their pasts, and use their writing and each other to work through what’s bothering them- which of course brings them even closer together.

“As different as I’d thought we were, it felt a little bit like Gus and I were two aliens who’d stumbled onto each other on Earth only to discover we shared a native language.”

Romance is the only genre in which the reader generally knows exactly how the book will end as soon as the characters are properly introduced- if not before. As someone who doesn’t typically enjoy predictability in any book, what makes a romance novel work for me is a convincing emotional journey- and this is where Beach Read excels. Considerably heavier than most of the romances I’ve read, the main characters in this novel are carrying some serious baggage; there is of course comedic relief and plenty of lighter moments, but even when things are good for January and Gus their hardships are never dismissed to make way for the steamy scenes, but rather become something for the two of them to work through together.

I actually don’t always like bookish books- author name dropping and stories within stories and references to people reading need to provide something to the book beyond cuteness to feel effective; lucky for me, Henry seems to get that, and doesn’t spend a lot of page time dwelling on what her characters are reading and writing. She uses these tactics only where they add something to the plot or characterization rather than letting the focus shift away from the emotional work her characters are putting into their writing and their relationship. Beach Read does include some commentary on romance being just as worthy a genre as literary fiction, though it feels more personal than philosophical because the antagonism is presented through characters who essentially embody their respective genres.

“I know how to tell a story, Gus, and I know how to string a sentence together. If you swapped out all of my Jessicas for Johns, do you know what you’d get? Fiction. Just fiction. Ready and willing to be read by anyone, but somehow by being a woman who writes about women, I’ve eliminated half the Earth’s population from my potential readers, and you know what? I don’t feel ashamed of that. I feel pissed.”

But there were a few details that made the overall effect less effective for me, despite my enthusiasm for the broader strokes.

First, neither of these characters ever asks for consent. This is something I always look for in romance novels, and even though both main characters seemed very self-aware, very considerate, and very attuned to the other’s body language, I can’t help feeling dissatisfied when in 350 pages of romance no consent is asked or given. Bonus points for proper condom usage, but that’s not quite enough to make up for it. Consent is sexy.

Third, a lot of Beach Read‘s emotion is driven by miscommunication and lack of communication, which is a peeve of mine. This is an enemies-to-lovers romance, in which the characters are only enemies because they’re misconstruing and making assumptions. Additionally, the MC has some intense family drama going on- a distant mother, a dead father, his all-too-present lover nearby. (None of these are spoilers, they’re all introduced very early as part of the set-up.) While it’s reasonable to misunderstand what another person is doing and to avoid uncomfortable conversations, it frustrates me as a reader when an honest chat or two would essentially solve 300 pages of tension.

Ultimately, I loved the attempt and most of the details but just wasn’t quite swept away by the whole. I liked that Henry made the effort to do something different with this romance; everything about it is a little unexpected- a “beach read” set in flyover country, a romance featuring a lot of death (and a cult!), a romance novelist writing a literary circus tragedy, etc. It should have been the perfect formula to win me over, especially as it leans slightly literary. I like Henry’s writing, and have enjoyed her work in the past as well, but both books of hers that I’ve read now have left me feeling that one of her books might end up being a favorite for me, though this just isn’t it. Maybe my ideal Emily Henry book hasn’t been written yet. I’ll definitely be keeping an eye out.

My reaction: 3 out of 5 stars. Don’t be fooled- I had a great time with this one and it was perfect for my mood this month. I just don’t think it will be very memorable for me long-term, even though… it could have been.

Next, I picked up Robert Macfarlane’s The Gifts of Reading, which was very thoughtfully gifted to me last year! This little nonfiction piece shares some of Macfarlane’s experiences with being gifted certain books throughout his life, and books he likes to give as gifts.

Macfarlane never quite comes out to say that we should gift books more often, but that is certainly the spirit of the piece. He effectively demonstrates that books given freely without expectation can have a profound, even life-altering effect on the reader. Most of the specific titles he mentions are books I haven’t read and don’t consider myself very interested in at this time, but I’m finding myself inspired to embrace book-gifting anew nonetheless, and perhaps to spend a little extra time with the books that others have given me over the years.

My reaction: 4 out of 5 stars. Honestly this was hard to rate, it’s so short and such a specific account of book gifting, but I did find it an enjoyable and encouraging read with an overall positive message. I have no idea who I would recommend this to- it is, perhaps, better to stumble across it without knowing too much, and simply let it take you where it will.

These two pieces have next to nothing in common, but both discuss books in a way that have restored some of the magic for me. I’ve been complaining about a reading slump for about a month (I swear I’ll stop now), but a little bookish reading turned out to be all I needed to kick it. What’s your favorite book about books?

17 thoughts on “Reviews: Beach Read and The Gifts of Reading”