Another round of “short” reviews, featuring two of my recent reads!

I picked up my first Yoko Ogawa novel this month, The Memory Police (translated from the Japanese by Stephen Snyder). After seeing it nominated for the National Book Award last year and loving the synopsis, it seemed like a good place to start with her work- and even though I didn’t enjoy this one quite as much as expected, I’ll certainly be reading further! 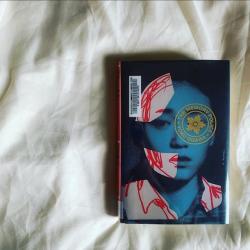 In the novel, an author lives on an island where things have a tendency to “disappear.” Islanders wake in the morning with a sort of hole in their memories, ponder until they realize which object used to fill that space in their hearts and minds, then destroy all physical traces of the thing that has “disappeared.” The Memory Police hunt down forgotten items, and  remove those people with perfect memories who resist the disappearances. The novelist becomes concerned when she realizes her editor is resisting, but she can’t hide everything that’s important to her; as she sadly complies with devastating disappearances, the editor tries to trick her memory into holding on to the things that are essential to her.

“Nothing comes back now when I see a photograph. No memories, no response. They’re nothing more than pieces of paper. A new hole has opened in my heart, and there’s no way to fill it up again. That’s how it is when something disappears…”

Structurally, this one reminded me of Blind Assassin, in which the novelist’s current manuscript appears occasionally between chapters of her own life. There are certain similarities between the two plots, with the novelist’s emotions and fears coming out plainly in her written story.

It’s an evocative, atmospheric tale full of secrecy and fear, an all-too-powerful government, a public that quietly acquiesces (following the path of least resistance) and a few rebels who fight back. The Memory Police is a novel that asks how much of our lives should be decided for us, and how much should be left to our own control. It’s a question that goes beyond what we are expected do, to what we are expected to feel. The magical element- the disappearances are not a choice- keeps the story from feeling like a direct parallel to any particular place or body of government, and yet it is otherworldly enough that many aspects of it feel widely applicable, linked easily to any place. It’s a story that frightens and demands further thought.

But I had a few hangups. I found the disappearances rather arbitrary and confusing through most of the book- some things, for instance, aren’t entirely gone: the ferry is “disappeared,” and yet it is still docked, its operator still lives on board, and he remembers the days when he happily ferried people across the water. The disappearances seem to be more of an emotional response, and thus are somewhat difficult to understand and to define; I prefer magic with clearer limits. I was also left with many questions about how things started disappearing at all, and why, and how the disappearances affected some people and not others, and who the memory police even are- designated islanders? Volunteers? Outsiders? Where are they taking the people who still have their memories? How do they know when someone or something is being hidden? Why do they care? Etc. These seemed to me like basic world-building and title-explaining questions, and instead of answering any of them, Ogawa asks the reader to trust and follow along blindly. In a way, this is exactly what the islanders must do- most of them don’t question anything and have no qualms about complying, and so the reading experience is a bit like the novelist’s life in that regard. And yet I couldn’t help feeling that opportunities were missed when the novel failed to delve more deeply into the particulars of its world and constraints.

“I had only to surrender to each new disappearance to find myself carried along quite naturally to the place I needed to be.”

Ultimately, though I enjoyed the writing, the plot, and many of the ideas driving this story, I was left wishing for more. More from this novel, but also more of Ogawa’s work. This book does seem to be a better fit for many other readers, so don’t let me dissuade you if you’re interested in the premise.

My reaction: 3 out of 5 stars. I’m glad to have finally read one of Ogawa’s translated works, and I’m certain it won’t be my last. I’m aiming to read more translations throughout the year in 2020, and even though this one didn’t excite me quite as much as I’d hoped, it was an encouraging start.

Additionally, I flew through my January BOTM selection- Miranda Popkey’s Topics of Conversation is a slim literary fiction volume just over 200 pages. It was also a mixed experience.

In the novel, a woman recalls various encounters and conversations she’s had over the course of about twenty years. Most of these conversations take place privately between women, though not all. In a series of vignette-like chapters, we follow the narrator from place to place as she carries the burdens of each confession throughout her life.

This is a novel that shows how quietly but relentlessly gender-specific abuse can affect women. When I say abuse, I mean that there’s a woman who is stabbed in one of these stories (though not on the page), and at least one who is raped (also not on the page), but much of it is more subtle. It’s seen in the women who admit they liked being told what to do, or who tell themselves that an affair with a professor was mutual and fair, or who feel guilty staying in a relationship with a nice guy. Women tell each other privately about the men who’ve hurt them, and the part that cuts to the heart the most is that the book is not a rage-fest but a quiet sharing of shame, acceptance of blame in many cases, and at times even a manipulation tactic. Our narrator, whether she knows it or not, is internalizing these horrid little stories and it’s obvious that they are shaping her idea of what is normal and acceptable, even desirable.

“I was pretty sure I knew where this story was going, not only because the man in the story had been identified as a sexual predator but also because it was late and it was only women and we were all a little drunk and under those conditions there is only one place a story about a boy and a girl ever goes.”

Though I loved the intent I saw behind these conversations, the persistant toxicity of a male-dominant power imbalance, the execution simply did not work for me. The writing style is a bit experimental, sometimes using quotation marks and sometimes not, flowing freely from dialogue to thought to exposition and back again in a single sentence. It’s not impossible to follow, but I couldn’t pinpoint any reason for using this sort of erratic style, and ultimately it did nothing for me. It’s also not entirely clear whether these conversations are all being told in retrospect- there are comments about future events woven into the narration, though the stories seem to offer very little of the reflection or that should come with twenty years of contemplation. Furthermore, it’s not entirely clear whether the narrator is reliable or not. There are moments when she’s all but bragging about her bad experiences, or inventing bits of her stories as she goes, or telling them for the sole purpose of making her listener react in a certain way. Of course these are all realistic ways in which women react to their experiences, but if our narrator here can admit to being untruthful and using her conversations to invoke a certain impression in her audience, how can we trust anything that she’s saying? And what is the point of the book if we can’t? With the possibility that the narrator is lying about ALL of her experiences, is there anything to learn from them?

“I am often thinking of the better story because the actual story is so often boring.”

I marked so many thought-provoking lines and passages from this book, and each chapter did eventually manage to  capture my interest. But ultimately, the pieces just didn’t add up as a whole. Each “conversation” is more or less a monologue from one character or another (mixed with the narrator’s commentary), and feels complete in itself, making the transitions rough and the stories disjointed. The common denominator, the narrator, remains too elusive to provide a sense of purpose. Though I really liked the themes I drew from this book, I did not particularly enjoy/appreciate the read, and am left wondering whether this one was worth my time at all.

“And yes I know no one keeps blogs anymore.”

My reaction: 3 out of 5 stars. I hope BOTM will keep offering experimental lit fic selections this year, even though this one did not quite live up to expectations.

Please let me know if you’ve read either of these books, I’d love to hear some different opinions!

23 thoughts on “Reviews: The Memory Police and Topics of Conversation”