For my first read of the year, I chose the 2019 National Book Award winner, Susan Choi’s Trust Exercise. Though it didn’t go at all the way I was expecting, it really impressed me by the end! 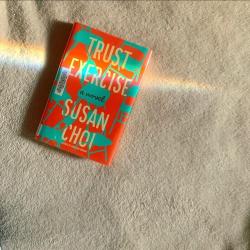 In the novel, a group of teens attends an exclusive performing arts school in Texas, in the 1980’s. Two of them, a girl and a boy, skirt around each other in an angst-filled battle of wills in which they both want a relationship but express themselves in different ways, ultimately getting their wires crossed. The whole school, of course, is privy to the dramas of their unrequited love. In the midst of this emotional turmoil, the cool theater teacher, the one who was on Broadway, the one all the kids want to be friends with, makes a game of their stubborn pride. For good measure, a few British theater students with two infamous teachers of their own are thrown into the mix, and so proceeds a chaotic tale of inappropriate relationships built around inappropriate art. Years later, the students- now adults- settle into their lives, still fixated the mess of their high school experience.

The book is divided into three parts, each labelled simply, “Trust Exercise.” They’re very different pieces and each, in their own way, requires some trust from the reader.

The first section, which takes up about half of the novel, is set in the 80’s art school. We mainly follow the teen girl, but the perspective is 3rd person and reveals a bit of each of the main characters. The one thing that I thought I knew about this book going in- that it features a pervy teacher breaking up a teen relationship and possibly molesting the girl- isn’t really what I found here, which really threw me off. Instead, it’s a plotless slog about two teens who desperately want to be together and can’t seem to make it happen. The teacher does seem questionable, but he spends little time alone with the girl, and most of that she spends crying in front of him as he asks invasive questions. On top of that, he’s gay, meaning that any apparent manipulations seem like a mental game rather than anything sexual.

” ‘You wanted me to go after her and make her feel better, and tell her we were still best friends. And I did, even though I was lying. And now I have to keep lying because she thinks that we’re best friends again.’ / ‘What makes you think that’s what I wanted?’ / ‘Because you told me to go after her!’ / ‘Yes, but that’s all I told you to do. I didn’t tell you to make her feel better. I didn’t tell you to lie, and say the two of you were still friends.’ “

But there’s clearly plenty of unacceptable behavior taking place and it’s intellectually interesting, seeing all the ways in which these students don’t understand they’re being manipulated or taken advantage of. The people they see as mentors treat them not as children to respect as such, but as inexperienced adults who can sort through the fallout of their uninformed decisions in their own time. It should be a fascinating power study, but it’s diluted by the focus on the failed teen romance and ultimately, the whole section seems to go nowhere anyway, ending rather arbitrarily with nothing resolved or concluded. Add to this the fact that I didn’t care about any of the characters at this point and had no interest in the theater aspect, and you can begin to understand why wasn’t enjoying myself.

Then comes the second section. Here, years later, we follow a woman who previously seemed like a minor character as she turns the entire narrative on its head. We find out that she’s been reading a novel written by one of her old classmates, that the first part of Trust Exercise is actually the first part of this novel, and then we find out that many of the events and details from this fiction-within-fiction are clues or coverups hiding the truth of what really happened. Our narrator in this section speaks in the first person, but also speaks about herself in the 3rd person, going by the fake name given to her by the novelist classmate. This tactic gives us a bit of duality, showing two sides of a much more interesting character who shines a light on what’s already been read and paints it over in an entirely different color.

The meta elements here and the addition of some darker plot twists really turned things around for me. The use of 1st and 3rd person from the same character as well as the introduction of a play brings the acting aspect together. It truly becomes a story not of power imbalance alone but of sexual abuse, of long-term trauma, and of the men in high places who for so many years have gotten away with too much.

The third section, the shortest of all, gives the reader an interaction between two  characters, both clearly recognizable despite the fact that one has not been named up to this point, and the other bears a new name. There’s not much new information to be found here, and nothing that happens between them is particularly surprising, and yet it is a necessary ending that ties the rest of the story together. The perfect garnish that puts the right tone on the book’s content and makes its purpose apparent.

My time with this book was a roller coaster experience, from a slow, seemingly straightforward, uninteresting start, to an utterly engaging and emotionally taxing middle, to the smooth leveling off of the end. This should probably have rounded off to a 4-star book for me. It took me three days to get through the first half and I didn’t like it. The framework of the story felt unbalanced. Choi has a tendency of overwriting in places, belaboring the point and drawing out an idea into a page-long paragraph when a single sentence would have sufficed. One character’s excellent memory means we occasionally get full dictionary definitions (this is not an exaggeration) for individual words, including commentary on how each possible interpretation of the word applies. It’s easy to see how readers who find the writing more grating, or who aren’t as enraptured as I was with the shift in the second part of the book, might have a more disappointing experience.

And yet, despite its flaws, I was completely caught up in the ride. I loved the book’s examination of power and abuse, and how far it pursued these themes. I loved the artistry involved in the narrative style and structure. I loved the misdirection that left me doubting what should have been obvious. I loved how quickly and completely Choi was able to change my mind about what I had read. She took my sky-high expectations and dropped them low, then lifted them right back up again. I’m actually looking forward to rereading that boring first section with my fresh knowledge. For this, I’m marking Trust Exercise as a 5-star read. It’s a brutal little book that isn’t as it first appears and requires a bit of mental reconstruction to piece together. I didn’t love every moment of the experience, but when I closed the book and set it aside, the story remained stuck in my head and I’ve been carrying it around with me for days.

“Your life outside school isn’t any of his goddamn business. You know that, don’t you?”

My reaction: 5 out of 5 stars. I chose this book from my 2019 books I missed list, and I’m so glad I finally picked it up. It took a while to convince me, but it got there in the end. Despite the rocky start, this one is setting a high bar for my 2020 reading!