My Faber Stories journey continues! In case you missed it, I’ve been reading through the 2019 collection of Faber Stories- individually bound short stories from a wide range of celebrated authors- since early this year. Originally a set of 20 stories (though always meant to expand, I think), there have been 10 more recent additions to the collection. I’ll link my reviews for the first 20 stories here: ( Mini-reviews part 1, part 2, part 3, part 4, part 5, and part 6). Below are the first three I read from the new batch; I’m aiming to wrap up the rest of the new volumes in two more sets of mini-reviews before the end of the year. For now:

This volume contains two short pieces by Fremlin, originally published in 1968 and ’70. Both are stories of hauntings, and both highlight a fraught mother-daughter relationship. The first features a teen girl home alone, ruminating about the house and her parents, when a mysterious girl her own age stops by and seems to understand everything. The second piece is the longer of the two, and focuses on a woman who, after the death of her sister, has spent years acting as a mother figure to her niece. Now that the niece is engaged and preparing a house of her own, her aunt has a terrible sense of doom hanging over the girl, and recounts her own past as she tries to piece together the reason for her increasing worry that her niece is in danger.

Both of the stories contain a twist at the end that answers the main “mystery” of their story, though neither are framed as a mystery, and neither has much of a plot. Where they excel is in their discourse on difficult parent-child relationships. The first story touches on the disparity in viewpoints: the child thinking she has some special insight into her parents’ personalities, the parents harboring a layered past to which she’s not privy. Building on this idea, the second piece shows the aunt’s backstory in the midst of her present fright, which contains enough depth to entirely explain the current situation. In this story, the protagonist’s history with her niece’s parents proves to have affected her entire relationship with the girl, though until this recent incident neither of them knew it.

In the end, though the broad strokes seemed fairly obvious, I enjoyed the depth revealed in each relationship, perhaps even more so in the final implications that each ending is actually a beginning of a new phase of life for these characters. The first story seemed the most predictable to me, and didn’t delve deep enough to really impress me, so that was a 3-star; the second piece I found much more intriguing, and landed on a 4-star rating. Overall I went with 4 for the volume because the themes and details did make these two pieces a very apt pairing.

I had no idea until I picked this one up that it’s actually the first graphic short story to appear in the Faber Stories set (originally published in 2015). Each page includes a bit of text, with an image beneath, comic-square style.

The story here centers around a soldier back at “home” between tours of duty; though he’s staying elsewhere, day after day he comes back to look at the old apartment where he once lived with his wife. Someone else now lives in the apartment, and the soldier, after learning this new tenant’s schedule, begins to let himself into the place with his old key. Things eventually go wrong (of course).

Though the surface details of the plot are certainly intriguing here, making this a quick read aided by expressive art that furthers the story, what really drew me to this one is the subtle between-the-lines commentary on this soldier’s state of mind. It’s clear that his time in service has altered his behavior and perspective, which likely led to the split with his wife. In that respect, I think this is an excellent piece depicting some of the hardships soldiers can face, even after returning home. I was a little disappointed that Tomine shied away from greater conflict with the ending, but I appreciated the psychological insight nevertheless.

Translated from Charles Perrault’s original French dating back to the 1600s, poet Moore here shares three early fairy tales. (“Early” here meaning that Perrault was the inventor of the fairy tale genre.) The pieces included in this volume are “Puss in Boots,” “Sleeping Beauty,” and “Cinderella.” Though these are all familiar stories now, the original versions vary a bit from their modern counterparts, meaning there are still a few surprises for the curious reader.

Unlike the two volumes above, the plots are the selling point here. The conflict is introduced early on, a magical element comes into play, and the hook is invariably, “how will this good hero/heroine get out of this mess?” From the introduction and Moore’s background in award-winning poetry, it’s clear that much attention has been paid to wording, and these stories are indeed very readable.

They’re also very dated. My biggest qualm here is simply that these tales are absolutely a product of their time, and were not modernized in translation. Princesses are supposed to be beautiful and charming and otherwise helpless while the king gives them away to whichever suitor he pleases, or a prince sweeps in to rescue them; the mother-in-law who doesn’t like her son’s wife is literally presented as an ogre; a man with hardly any property to his name impresses the king with gifts of small game, and easily gets away with lying about his title and land ownership. Some casual misogyny and pre-internet lawlessness are to be expected from this time period of course, but even so I wish we could celebrate this genre and these stories without perpetuating some of those less desirable elements that haven’t aged as well.

Even so, I found “Puss in Boots” clever and amusing, “Sleeping Beauty” captivatingly dark, and “Cinderella” simply a very pleasant read- she’s such an amiable character in this version that it’s impossible not to root for her happy ending. My only complaint about plot is that “Sleeping Beauty” really felt like two separate stories: one about the princess pricking her finger on a spindle and falling asleep, and one about the princess become a secret bride in a dangerous family. Both interesting, though the second half doesn’t quite flow logically and smoothly from the first. All three stories are engrossing and amusing, though unless you want to ruminate on helpless women and tricksters becoming rulers, there’s not any sort of moral to be drawn or thought path to continue down after closing the cover.

“A prince, young and in love, is always brave, and this one, true to tradition, went boldly to the forecourt of the castle. There, what he saw would have frozen the blood of the bravest. In the fearsome silence, everything everywhere had the look of death…” 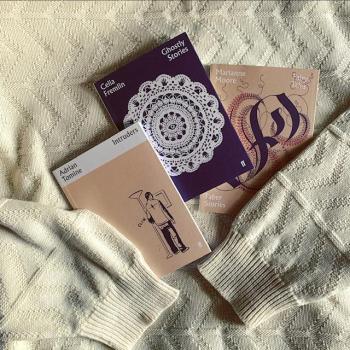 In conclusion, these were entertaining reads I’m glad I picked up, though none of them is compelling me to pick up further works by these authors. These all helped keep me going when I hit a bit of a reading slump in October/November though, so I’m grateful for that, but hoping for even better luck as I continue through this collection!

Have you read any of these, or have your eye on any of the other Faber Stories?