I’ve enjoyed both The Haunting of Hill House and The Missing Girl by Shirley Jackson in the past, but neither could have prepared me for quite how much I loved Jackson’s We Have Always Lived in the Castle. Immediately after finishing, I turned on the 2019 film adaptation, currently available on Netflix (US).

In the novel, 18 year-old “Merricat” lives in Blackwood manor with her older sister, Constance, and their ailing uncle. The rest of the family perished in an event that further ostracized the remaining Blackwoods from the nearby villagers. Merricat is the only one of the three who still ventures into town, and does so as infrequently as possible to avoid the blatant rudeness and derision of the village folk. Isolation suits Merricat well, but Constance is easily charmed by an estranged cousin who appears unexpectedly and she begins to believe that she’s been a coward to lock herself inside the manor and tolerate her family’s eccentricities. Conflict divides what’s left of the family, which incites further tragedy.

” ‘I’ve been hiding here,’ Constance said slowly, as though she were not at all sure of the correct order of the words.”

This is a psychological horror story set in 1960s Vermont. It’s creepy and bizarre from start to finish, and disturbingly human. Though the eeriness comes mainly from the gothic tone, the woodsy, secluded setting, and the violent mob-mentality of the villagers, it’s the characterization that makes this story so utterly convincing. Constance’s unceasing optimism, Uncle Julian’s fixation on the family’s demise, Cousin Charles’s selfishness and obsession with money, Merricat’s whimsy and dark determination. Even though Constance stood accused of murder, the family remains close, expressing no regret or sentimentality over the lost family members or suspicion over those deaths. It’s haunting, and yet each of them are so clear that it’s impossible to dismiss them as mad fictions. (Don’t we all just want our bullies to leave us alone?)

With the focus so heavy on characters, there’s not much plot at the foreground, and what little there is is presented as a mystery. When the story opens, we know only that these sisters and their uncle have been alone in Blackwood manor for six years, and that the villagers have hated them all this time. Gradually, what has happened to the family is revealed, the how and why of it saved for later or left to vague hints. There’s plenty to ponder, and anyone who’s not willing to do the mental work of piecing the puzzle together is likely to find We Have Always Lived in the Castle a confusing bore. But whatever you make of it (there is a bit of ambiguity, even once the main mystery is solved), the themes of otherness and conversely, of unquestioning love, stand out at the forefront of this story.

“The people of the village have always hated us.”

All in all, it’s a disturbing delight to read, perfect for Halloween, and I would recommend it to anyone who appreciates a good psychological puzzle. Bonus points: it’s a quick little read, weighing in at less than 150 pages. 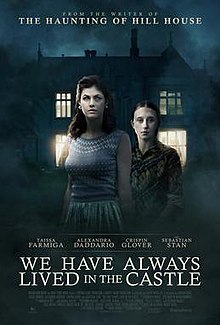 In the film, we see a very faithful adaptation that doesn’t contradict the novel in any major way. Some of the dialogue is lifted straight from the book, many of the scenes are the same, there is no difference in cast or characterization.

There are only a few small changes worth noting at all, the main one being that the ending is wrapped up a bit more quickly and definitively in the film, and the book’s biggest “twist” is saved for this final scene, whereas the novel introduces it a bit earlier and then slowly spins to a halt. The other point I want to compare is that the how and why of the first family tragedy is hinted at a bit more directly in the film; this new evidence follows the same direction of the assumptions I made based on the novel’s hints, but there’s less left to the audience’s imagination in the film. If you’re just looking for a quick, spooky diversion and don’t want to do the mental work of sorting out who did what and why, skipping straight to the film would be a great choice.

But, though it’s generally easier to watch a film than read a book, and this one does excellent service to its original text, Jackson’s writing in the novel really is exquisite and compulsively readable. It’s really not to be missed, if you’re a fan of classic horror!

” ‘It used to be a lovely old house, I hear,’ said the woman sitting on our grass. ‘I’ve heard that it was quite a local landmark at one time.’ “

My reaction: 5 out of 5 stars. For both formats. I was hooked within the first paragraph of the novel- nay, the first sentence- and loved every bit of it. The film grabbed my attention instantly as well; I adored its colors and the quality of the light, which, as a words person, isn’t usually something I even notice, but I did here. I can see how readers/watchers who like plotty stories might not get along with this one, but both formats were just a perfect fit for me.

Have you read or watched We Have Always Lived in the Castle? Plan to?

10 thoughts on “Review: We Have Always Lived in the Castle (novel and film)”