Last year I read The Vegetarian by Han Kang, translated by Deborah Smith, which I found quite powerful and have been returning to often in thought ever since. This year (and just in time for the end of WIT month!) I picked up my second novel from this author/translator duo, Human Acts. Though quite a different work, I found it equally brilliant. 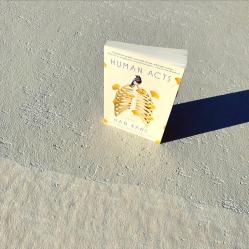 In the novel, the events and impact of the Gwangju uprising in 1980 South Korea unfold in a sequence of interconnected vignettes. Dong-ho, a fifteen year-old boy, is the link that connects them all. After being caught in a violent government-sanctioned attack on civilians, the boy tries to take a more active stance in aiding the victims and fighting for justice. From here, the story leaps through the next three decades in an examination of the aftereffects of the riots.

“Why would you sing the national anthem for people who’d been killed by soldiers? Why cover the coffin with the Taegukgi? As though it wasn’t the nation itself that had murdered them.”

This book is absolutely brutal. Though I found The Vegetarian psychologically disturbing (in the best way), Human Acts is a very different beast because it tackles a historic event. There is no way to dismiss the horrors that these characters describe- though the characters themselves are fictional- because these horrors are born not from the imagination but from reality. I knew nothing about Gwangju before reading this book, but now I am positive I will never forget about it.

“What had proved most incomprehensible was that this bloodshed had been committed again and again, and with no attempt to bring the perpetrators before the authorities. Acts of violence committed in broad daylight, without hesitation and without regret. Commanding officers who would have encouraged, no, even demanded such displays of brutality.”

What impressed me most about Human Acts is the way that Kang focuses the narration not on the grisly details of the uprising itself, but on the physical and mental affects that result from them. We are told about deaths and torture tactics, but instead of wasting space trying to convince readers of how awful these experiences are, she focuses instead on how the characters try or fail to cope with what they’ve been through- which somehow makes it all the more awful. For example, one chapter follows an ex- factory girl; a few sentences sum up the worst of the trauma she experienced after being arrested as part of a labor union, but the chapter revolves mainly around her attempts to visit an old factory friend and her incapability of sharing her own story. This was the section I found most moving, though each contains at least one gut-wrenching moment that leaves an impression.

Throughout the novel, there is much focus on the body, though Kang never lets the reader forget that the villains here are human too- there is an incredible and unsettling message evident that cruelty is as much a part of human nature as suffering. We hurt, and we are hurt. It’s devastating to think that this might be the human norm.

“Is it true that human beings are fundamentally cruel? Is the experience of cruelty the only thing we share as a species? Is the dignity that we cling to nothing but self-delusion, masking from ourselves this single truth: that each one of us is capable of being reduced to an insect, a ravening beast, a lump of meat? To be degraded, damaged, slaughtered- is this the essential fate of humankind, one that history has confirmed as inevitable?”

Something I liked a bit less is the use of frequent perspective shifts. Each chapter highlights a different character’s experience, and many of them are referenced in different ways, depending on the chapter. In the first section, we follow Dong-ho, who is addressed in the second person, as “you.” In the next section, we follow Dong-ho’s best friend, who is an “I” telling his story to Dong-ho’s “you.” The factory girl is also a “you” in her section, though other characters use the first person “I” or the third person “she/he.” I thought some of these POVs were more effective than others, and found the constant changes a bit tedious and confusing. Ultimately, I am not sure the effect was worth the effort.

But that’s a small complaint. Overall, I found this an engaging read full of unrelenting pain and haunting beauty. It’s a piece of world history worth knowing about; I’m sure I’ll remember the lesson, but I don’t think it will stay with me in quite the same manner that The Vgetarian will; while Human Acts opened my eyes to a real event and a deep level of human suffering, it seems to me a  self-contained story, speculations on human nature aside. The Vegetarian, though less grounded in history, struck me as an inventive masterpiece of fiction with more widely applicable themes. It’s difficult to say I “liked” either one better than the other, or would recommend one more highly than the other, as I think they are quite opposite pieces of work. Both entirely worth the read.

” ‘The soldiers are the scary ones,’ you said with a half-smile. ‘What’s frightening about the dead?’ “

My reaction: 4 out of 5 stars. I should have picked this book up sooner. I believe there is only one more Han Kang book translated into English so far, The White Book, which I’ve already added to my TBR. I want to read it right away, but also I’ll be sad to run out of new works to read from her- at least for now. Unfortunately I don’t think I’ll get to my other WIT reads before the end of the month either, though I’m still planning to pick them up soon anyway; I need more translations in my life.

Have you read any of Han Kang’s work? Do you have a favorite?