I have reached the end of my first wave of Penguin Moderns. I bought 6 right away when the collection was released, and I’ve just finished reading the sixth: Betty Friedan’s The Problem That Has No Name. I’ve already ordered 6 more that should be arriving any day now, but I think I’ll either try to read them more sparingly or start reviewing them in my monthly wrap-ups so my regular posts aren’t inundated with all these short modern classic reviews. Unless you like these? Here’s one more to help the decision process in the meantime. 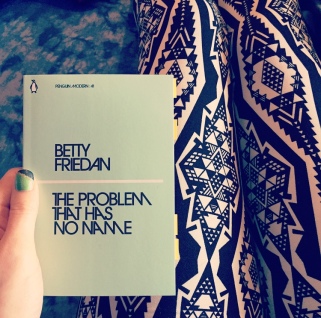 About the book: Betty Friedan was a publishing feminist in the 1950’s/60’s who captures the discontent of the American housewife in that period. Even before there is a name or a clear way to describe the problem that women were experiencing with losing their identities in marriage, the stirrings could be seen in statistics, hospitalizations, statements of complaint, and more. Friedan pulls sources together to make a case for the harm being done to women across the nation as society tells them over and over in every way that their place is in the household, as a wife and mother and nothing more. In two essays, “The Problem That Has No Name” and “The Passionate Journey,” Friedan outlines the first wave of feminism that culminated in women’s right to vote in 1920, and the second wave around 1960 when women begin to rise together again to win destinies as more than subservient childbearers.

“The problem lay buried, unspoken, for many years in the minds of American women. It was a strange stirring, a sense of dissatisfaction, a yearning that women suffered in the middle of the twentieth century in the United States. Each suburban wife struggled with it alone. As she made the beds, shopped for groceries, matched slip-cover material, ate peanut butter sandwiches with her children, chauffeured Cub Scouts and Brownies, lay beside her husband at night, she was afraid to even ask herself the silent question: ‘Is this all?’ “

This is a nonfiction book with a lot of statistics, dates, names, etc. It’s an outline of where we’re coming from in regards to gender inequality in the US, and Friedan lets the facts do the work in persuading readers to join the cause.

“The wonder is that the feminists were able to change anything at all– that they were not embittered shrews but increasingly zestful women who knew they were making history.”

Although the information in this volume is a bit outdated– we no longer see a nation full of women stuck under the title “homemaker”– this is a great start for anyone interested in the history of feminism. And it’s shocking how very recent some of that history still is. Friedan writes about a time when women had legal rights, but were still expected to fit a certain mold that society formed for them. They were allowed to work and go to college, but society frowned upon the women who did and so those rights went unused in many cases. Women were pressured from every side to live a certain lifestyle, and they gave up so much of themselves to fit into the box the world wanted to put them in.

“The problem was dismissed by telling the housewife she doesn’t realize how lucky she is– her own boss, no time clock, no junior executive gunning for her job. What if she isn’t happy– does she think men are happy in this world? Does she really, secretly, still want to be a man? Doesn’t she know yet how lucky she is to be a woman?”

Women have made strides. We’ve come a long way toward equal treatment despite gender, but there are still issues to fight for. The issues covered in “The Problem That Has No Name” were new in their time, but they are largely battles that have been fought and won by now. In the pressure to be a perfect wife, a perfect mother, to work in the home and keep up appearances, women of Friedan’s time lost their personalities, their very humanness.

“It was the need for a new identity that led those passionate feminists to forge new trails for women. Some of those trails were unexpectedly rough, some were dead ends, and some may have been false, but the need for women to find new trails was real.”

Friedan writes for the generations of the future– for this generation, and generations to come. Though she discusses social issues of her own time, she writes with an eye toward documenting. She doesn’t want women to fall into another lull like the one in the twentieth century that led to millions of passive housewives with no real agency. She is remembering and reminding that each life is unique, and the fight for equality is not complete until every right is won.

“The women who suffer this problem have a hunger that food cannot fill.”

My reaction: 5 out of 5 stars. I’m increasingly interested in feminism and this volume provided both new information for me and renewed my standing passion for the issue. For those that aren’t sure how they feel about feminism yet, this might be one of the books with the power to help you decide, as its very informative and briefly covers nearly 200 years of feminism. I don’t know that I will be reading more of Friedan’s work (I feel like I’ve gotten the gist from this volume), but I will be reading more feminists, and I will be reading more Penguin Moderns. I just might not be reviewing them the same way.

2 thoughts on “Review: The Problem That Has No Name”